This is our first installment of our NHL-wide analysis of puck-moving defensemen.  In today’s NHL, puck movement from the back-end is critical towards driving possession, generating scoring chances, and preventing opponent scoring chances. Before diving in, let’s understand our methodology (at a high level).

Corsi, in its’ basic form, has flaws. It doesn’t account for many factors such as relative corsi of your team, your linemates, your opposition level, zone start percentages, etc. Many analysts adjust Corsi to incorporate some of these elements.

Other important metrics have emerged too. Controlled zone exits and entries are a good measure of possession. There are many pieces to the puzzle. Our approach combines what we’ve identified as critical elements of the “puzzle” for puck moving defensemen and we’ve built a metric to measure puck movement ability.

The core of our approach focuses on relative corsi improvement of a players’ teammates. It adjusts for quality of defense partner, zone start percentages, the “chemistry” factor, and others. For proprietary reasons, we won’t reveal the exact formula. 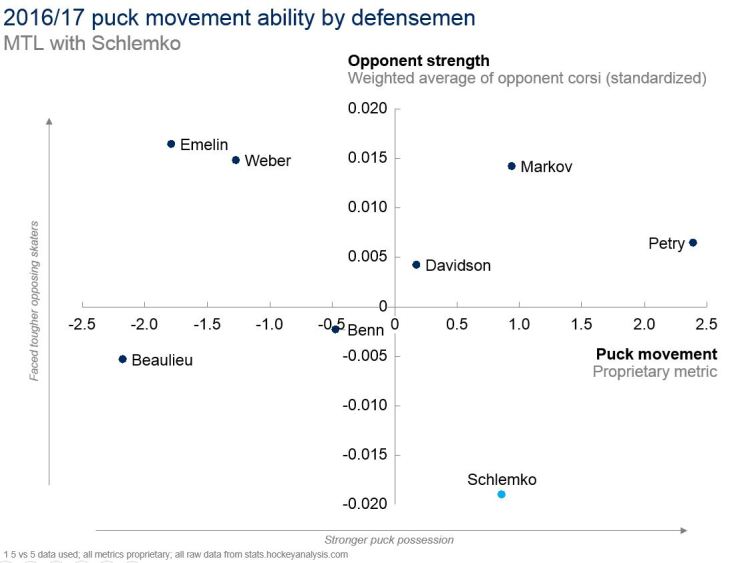 To understand the chart: The Y-Axis (opponent strength) is a measure of the average corsi that the defenseman faced over the course of the season, weighted based on number of minutes they played against them. Players on the top (e.g., Weber, Emelin) faced tougher average opponents over the course of the season. The X-Axis (puck movement) measures the players’ ability to drive and maintain possession for the team (5v5). Players on the right (e.g., Petry, Markov) scored the strongest as puck moving defensemen.

The top right corner is the target. Those players (Petry and Markov) score the highest in puck movement while facing the toughest opposition night-in and night-out. Weber and Emelin face tough opponents, but weren’t able to drive possession as well as Petry and Markov.  Interesting that Beaulieu (now on Buffalo) struggled despite facing below average opposition.

The addition of Schlemko is an interesting one. His Corsi alone shows strong possession but many are quick to point out that San Jose was a strong possession team to begin with. This is true but Schlemko still elevated the possession of his teammates. That said, Schlemko faced weak opposition and only started 27% of shifts in the defensive zone. He will likely slot in as an above average 3rd pairing d-man (obtained at reasonable acquisition price).

In summary, the Montreal Canadiens top 2 puck movers are Petry and Markov (currently UFA and 38). Anyone who watches Weber play understands he’s not known for his first pass; instead, he brings grit, character, strong defensive play, and a wicked slap shot (great on PP). Still, with Markov aging Montreal is likely in the market for a younger puck mover. Schlemko is a good start, but likely will slot in as a 5/6. It is likely MB is looking to add another 3/4 d-man before training camp.