A lot of news this off-season about the possibility of Matt Duchene getting traded. Most teams in need of a top 6 center would at least entertain the idea of making Colorado an offer. One of the names that has surfaced – along with Duchene’s – is Alex Galchenyuk in Montreal. There have even been rumors dating back to the 2016/17 trade deadline that had the two teams swapping the players.

Today we take a quick peak into both and examine each player along 3 criteria that are critical for a center iceman in today’s NHL.

1. Ability to drive possession and make his teammates better

2. Ability to drive offense and generate goals for his team

3. Ability to be defensively responsible and play a 200 ft game

Fully understand that 1 and 2 (and even 1 and 3) aren’t entirely mutually exclusive – but we felt it was worth separating them out for the purposes of our analysis. 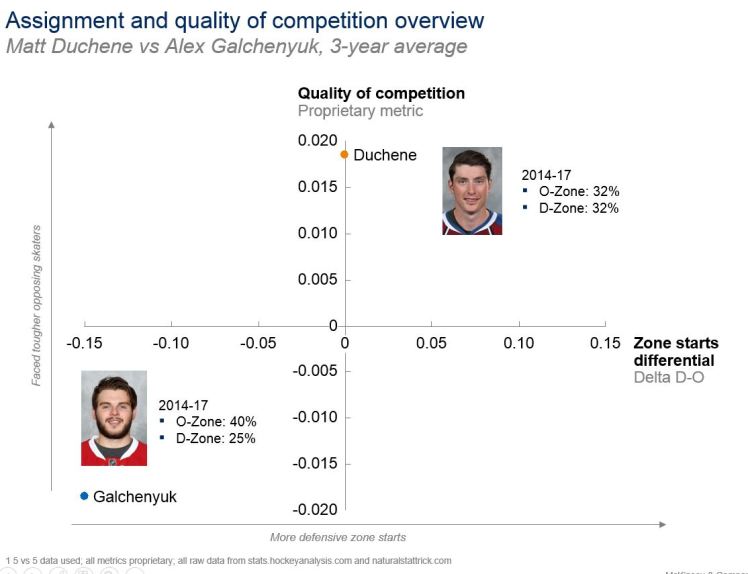 Just a small example – but as you explore the list you’ll notice the same trend. The reason this is extremely important to take into consideration throughout the entire analysis is because quality of competition creates an uneven playing field when comparing two players. If one posts a much better ability to generate scoring chances than the other, does that mean he is better offensively? Maybe, but not necessarily. Perhaps the other player faces much stronger competition (because his coach assigns that role to him). It is reasonable to argue that the players’ ability to score goals will be greater against the weaker competition.

Ability to elevate their teammates

The ability in a center to drive possession for their team and elevate their teammates is similar to a defenseman’s ability to drive possession. We therefore used a variation of our puck moving algorithm to measure this ability for center icemen. This is a core skill that any team covets in their top pivot. 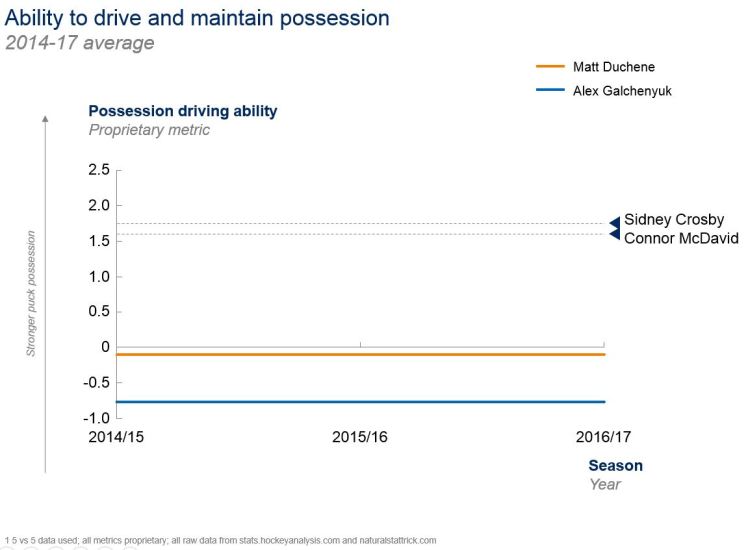 Over the past 3 seasons, on average, Duchene was better at driving and maintaining possession than Galchenyuk was. Duchene appears better at elevating the linemates he plays with. That said, neither was standout. Relative to every forwards’ score across the league, Duchene ranked as a ~2nd line whereas Galchenyuk was more a ~3rd line. Remember, this is just in terms of their ability to elevate their linemates and make their teammates better. Clearly neither is in the same class as the top guys in the league (Crosby, McDavid).

Here’s where quality of competition makes this interesting. Duchene appears better at driving and maintaining possession than Galchenyuk despite facing tougher QoC and more defensive assignments. That difference is notable.

Looking at Duchene’s past 7 years, you’ll notice a drop in score. His average from 2010-14 (+0.20) was better than the last 3 years (-0.10). While this might be a sign of tougher QoC and more defensive assignments (as Mackinnon could be used in more offensive roles), it also might be natural decline in play 5+ years into his career. 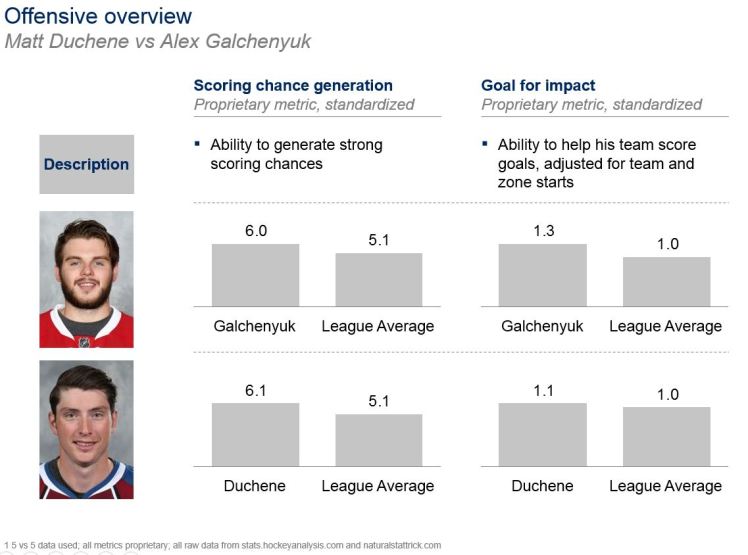 In terms of pure offensive ability, Galchenyuk appears to be slightly better than Duchene. Account for QoC, and they’re likely fairly similar. Scoring chance generation measures a player’s ability to not just drive possession, but create solid scoring opportunities for their team. It’s a measure of playmaking ability and offensive instincts – and both players are above average. Again, we adjusted for team and league averages to get a sense of impact that can be compared across centers.

Goals-for impact is another offensive metric that goes one step beyond scoring chance generation. We looked at how their team fares at scoring goals with them on the ice – and adjusted for zone starts, team averages, and a couple other factors. While both are above average, Galchenyuk has the edge offensively. 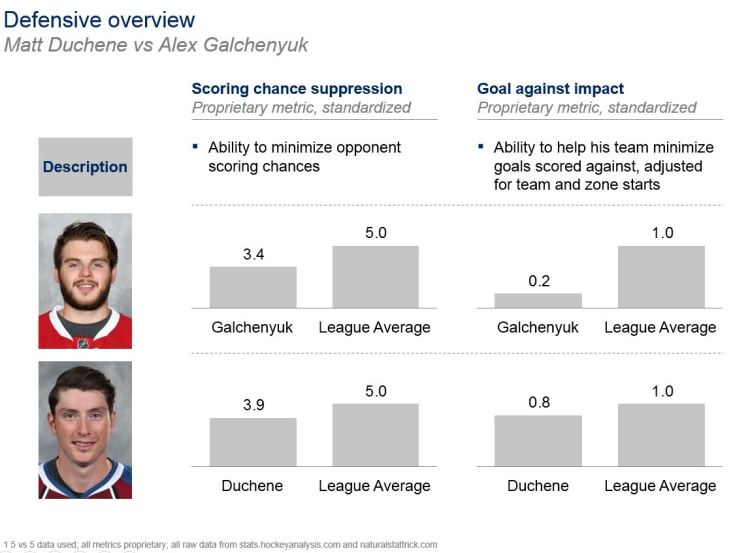 Looking at the past 3 years, both Duchene and Galchenyuk appear to be below average defensively. That said, Galchenyuk is significantly more below average. It’s easy to quickly compare stats like GA per 60 and draw conclusions, but those need to be adjusted for many of the key factors we touch on: team strength and averages, save percentage, zone starts and tougher defensive assignments, etc.

In terms of scoring chance suppression – i.e., a center’s ability to tie up their man, clog the middle, be responsible, back check, etc. – Duchene is stronger than Galchenyuk (3.9 vs 3.4). In terms of Goals-Against impact, Duchene is much stronger than Galchenyuk (0.8 vs 0.2). Not only has Duchene been stronger defensively, but he’s done so while facing stronger opponents and taking on much higher defensive responsibility.

It will always remain tough to draw clear conclusions from a player vs player comparison as there are many factors (even beyond some we touched on) that go into a player’s evaluation. In terms of the 3 core areas we identified:

Ability to elevate your teammates and drive possession: EDGE Duchene

Neither is – and will ever likely be – a top-30, 200 ft, #1 center. That said, Duchene – today – appears to be a solid #2 center who can contribute offensively and be OK defensively. Galchenyuk, still only 23 and fresh off a 3-year contract, still appears to be finding his niche. One thing is certain: 2017/18 will be an interesting year for both players.