Analytics are helpful in that they help you ‘catch’ key trends or insights that are not necessarily ‘catchable’ by the human eye. While obviously not the only part of the equation, analytics are one of many useful tools that should at least be considered in the evaluation of players.

It becomes especially interesting to look at past deals / transactions and understand how analytics might have informed such decisions. Today, we dive into the 2014/15 blockbuster that sent Keith Yandle to the Rangers for Anthony Duclair, a lottery protected first round pick, and a second round pick. 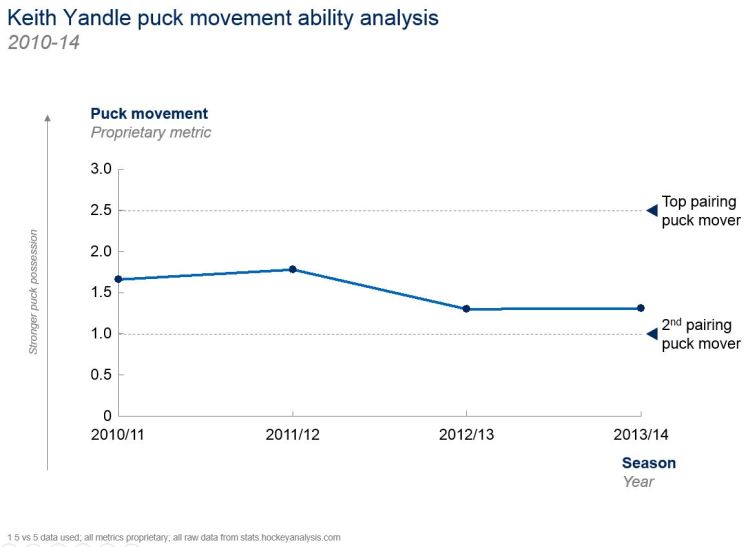 A couple important things to notes:

+ Yandle was extremely effective (and consistent) as a possession driver, posting an average PMF of +1.51 over the 4 seasons. That is in line with a strong 3/4 d-man (2nd pairing) at 5v5. Yandle also faced decent QoC, so he wasn’t highly sheltered on the third pairing in Arizona

+ That said, Yandle did benefit from favorable zone starts (so was indeed sheltered to a degree).  Over the 4 years, Yandle averaged starting 36% of shifts in the offensive zone at 5v5 vs just 29% in the defensive zone

+ Still, the early answer is yes – Yandle was an effective defenseman at 5v5. He was above average as a 2nd pairing d-man, driving possession and making his teammates better.

Was the price worth it?

Important to also note Yandle was 28 at the time of the trade and had 1 more year on his contract so it wasn’t a pure rental. It is without question that the Rangers paid a hefty sum: Duclair was – and is – a high end prospect, and another first and second round picks are valuable assets.

Looking at what we know to date (date being 2014), Yandle is a strong 3/4 puck moving defenseman who likely needs to play in a somewhat sheltered role, and brings additional value as a powerplay quarterback.  For a team in need of PP help and looking to build on an already potent blue line in time for a playoff run, Yandle fits what the Rangers are looking for.

An interesting comparison would be Jeff Petry who was also acquired at the deadline for a 2nd and conditional 5th. 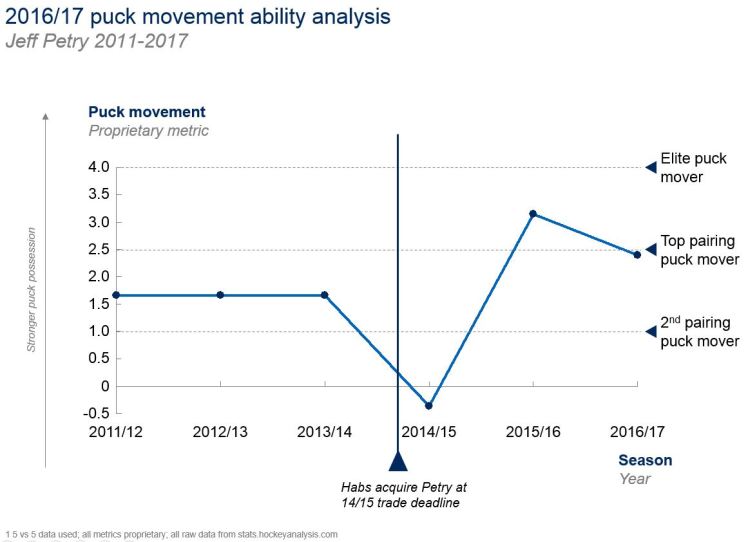 Petry posted similar 5v5 puck movement ability against slightly better QoC, too. That said, Petry was a rental (so no guarantee he would resign) whereas Yandle was inked for another season. Also, Petry doesn’t bring the powerplay ability that Yandle does – which many teams covet for good reason.

But that is the trade-off, really. For comparable players 5v5, is one more year + powerplay value worth the difference in what they paid? That’s what both Marc Bergevin and Glen Sather were likely considering as they weighed their options. 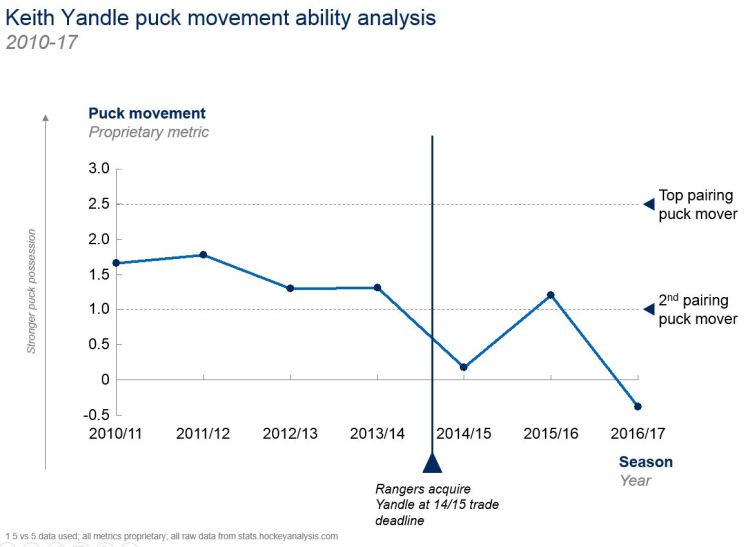 Yandle played an important role in the Rangers playoff run that year, posting 11 points in 19 playoff games and anchoring their powerplay.

You’ll notice a big drop in 5v5 puck movement from Yandle from 2015/16 to 2016/17. Perhaps this is a part of downward trend to come. That said – and still only 30 – it’s likely driven from the different role Yandle took on in Florida (vs what he played with the Rangers).

In 2015/16, Yandle played a 2nd/3rd pairing, sheltered role at 5v5. His defense partner was Kevin Klein. The average QoC he faced was much weaker (goals/60 and primary assists/60 of the forwards he faced were ~15% lower than league average). Some names he spent most time on the ice against: Hagelin/Kessel (3rd line for Pittsburgh), Chimera/Wilson (3rd line for Washington), Pierre-Edouard Bellemarre/Read (3rd line Philly) – gives you additional context for the QoC he faced. Additionally, Yandle started 45% – 45%! – of 5v5 shifts in the offensive zone vs just 24% in the defensive zone.

2016/17 in Florida was a different story. Perhaps out of necessity and not having the same depth on D as the Rangers, Yandle was not sheltered as much. He started only 34% of shifts in the offensive zone and faced much tougher QoC (goals/60and primary assists/60 of the forwards he faced were 5-10% higher than league average). He spent much of the season paired with Aaron Ekblad who routinely faces the opponents’ top forwards (and Jason Demers when Ekblad was hurt). In comparison with the names above, Yandle spent lots of ice time against Kucherov, Pacioretty, and Marchand. The differences are clear.

QoC summary shown below (for forwards he faced) 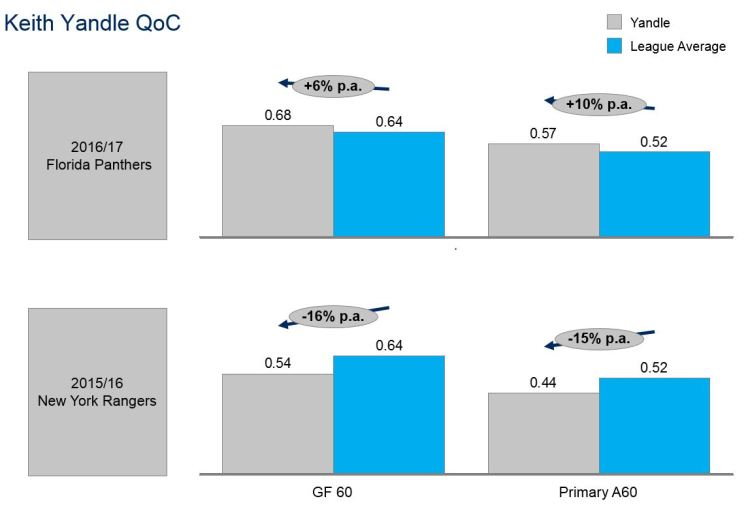 Despite being thrown into a tougher role 5v5, Yandle didn’t fare too poorly. A PMF of -0.38 is slightly below his career standards as a puck-mover, but also very respectable when facing the QoC that Yandle faced in 2016/17.

Yandle appears best suited in a 2nd pairing role (3/4 d-man) at 5v5. As an offensive defenseman, he’ll continue to be an asset on the powerplay. While 2016/17 was still a respectable season for Yandle, it remains uncertain whether he can regain his strong puck movement numbers against top competition.

At $6.35M/season, Yandle is the 15th highest paid defenseman. As a 3/4 d-man, with powerplay value, he’s likely slightly overvalued. That said, teams have no choice but to overpay when luring in a player in free agency.  Some interesting comparisons are Mike Green ($6M/year) and Jeff Petry ($5.5M/year). Green plays a similar role to Yandle and Petry – as discussed – is better 5v5 but doesn’t bring the same value with the man advantage.

The big question mark with Yandle is whether he can regain his form from a couple years ago. He would have appeared to do so in his last season with the Rangers, but was sheltered by the coaching staff for much of that season. Now on the wrong side of 30, 2017/18 will be a strong indicator of where that trend is heading. The Panthers are hoping it’s up.