The Boston Bruins racked up 95 points in 2016/17, finishing 3rd in the Atlantic Division. The Bruins are strong on offense with depth up the middle (Bergeron, Krejci) and a pair of dynamic scoring wingers (Marchand, Pastrnak). That said, they find themselves in a transition period on the blue line. Let’s explore.

***Note: For further detail on methodology and explanation of the chart, please refer to our methodology section 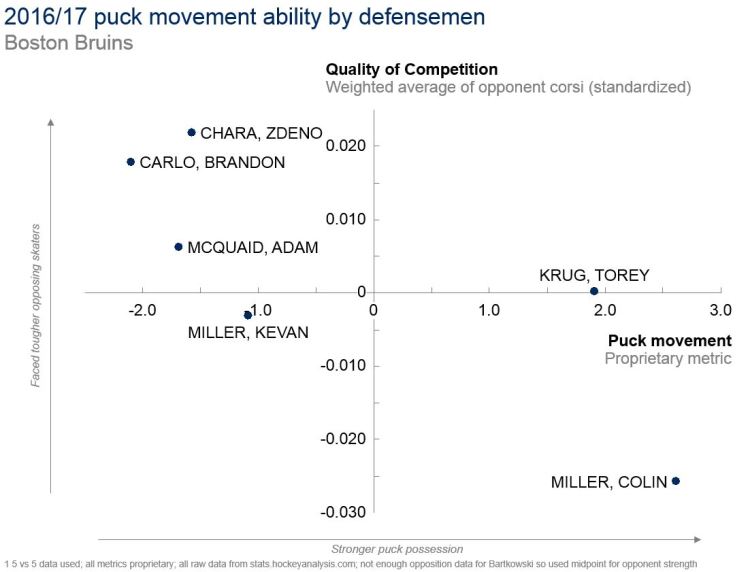 + Colin Miller (PMF +2.61) had a very strong year as a puck-mover in a sheltered role. He started 42% of shifts in the offensive zone (vs only 23% in the defensive zone) and faced the weakest quality of competition. Still, he was a solid piece and his puck movement ability did not go unnoticed as the VGK nabbed him in the 2017 expansion draft.

+ Torey Krug (PMF +1.91) is another strong puck mover on the Bruins. Like Colin Miller, the Bruins were hesitant to send him out against the top opposition. Krug also started 38% of shifts in the offensive zone (vs 27% in the d-zone). Krug is a strong offensive defenseman (51 points in 2016/17) and a solid puck mover, but is likely better suited on a 2nd pairing 5v5.

+ Zdeno Chara (-1.57) is near the end of his career. He still eats top 4 minutes and faces the top opponents, but is not nearly the possession driver he once was. Let’s look at Chara’s PMF over the past decade: 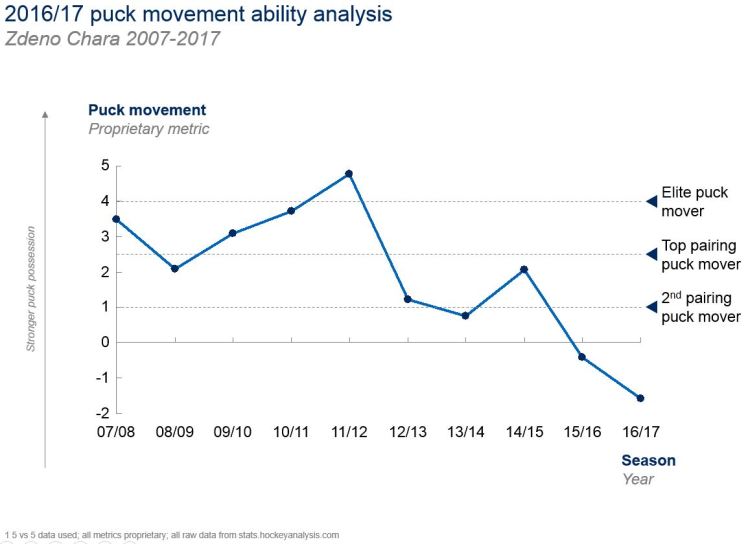 As a puck mover, Chara was among best in the league from 2007 to 2012. His decline in that area has been particularly significant over the past 2 seasons. This last season (-1.57) was his worst in the past 10 years.

The Bruins clearly have identified defense as an area of focus and rebuild. Their past 3 first round picks have all been defensemen (Vakanainen in 2017, McAvoy in 2016, Zboril in 2015).

In addition to being a top-end shutdown stud over the years, Chara has also been a key piece in driving offense for the Bruins. As his career winds down, questions remain as to who will step up and fill the void.

Will Krug be able to maintain that production against top line competition? Can Carlo take the next step in year 2? Or will one of the other recent top draft picks step up in their rookie season? Time will tell.