To date, we’ve focused primarily on puck movement ability by defensemen. Puck movement is a critical skill in today’s NHL and merits the emphasis and value that many teams place on it.  That said, there’s still value in a player’s ability to go out, face the top opposition, and minimize the scoring chances that they generate.

Let’s consider a hypothetical situation. Shea Weber starts a shift in the defensive zone against the Capitals top line (Ovechkin, Backstrom, Oshie). Washington, given their top line’s offensive skill and ability, controls most of the shift and generate 2 shots on goal. If Weber makes life tough on the forwards, boxes them out of the defensive zone, cuts off key passing lanes, and limits those shots to the outside before changing at the whistle – is that a win or a loss for Weber and the Canadiens? That’s likely a positive outcome for Montreal.

Now this is not to take away from the ideal, puck-moving scenario in which Weber steals the puck, leads the breakout, and helps generate scoring chances for his own team. Rather, it is a way to acknowledge additional ways a defensive d-man, like Weber, can help his squad. When evaluating players, it’s important to understand both their ability as a possession driver as well as a defender.

To measure this ability, we looked at a player’s ability to minimize the high quality chances generated by the opponents. For example, Shea Weber might be on when the other team generates 100 shots vs Petry who might be on when they only generate 50. But if 10% of the shots Weber faces are great scoring chances vs. 20% of Petry’s, then they’ve each been on for 10 scoring chances. That is the basic premise.

Of course, we adjusted to the defensive ability of the team overall (e.g., the rationale being that a strong team will over inflate the score of a weaker defender, and vice-versa for a weak team under-inflating the score of a strong defender). We then standardized the metric against league average. While we considered layering in % zone starts, the regression (with 3 years worth of data points) showed it was statistically insignificant (R-squared of 7%). Rather, O-zone and D-zone start % were key factors in our puck movement metric.

+ In addition to facing the top QoC, Weber leads the way as the Habs top defensive d-man. His defensive ability metric (DAM) of +2.64 is among the best in the league.

+ Markov also posted a solid score defensively (DAM +0.31) which is akin to a 2nd pairing. This adds further context to Markov’s ability as an all-around defenseman. He’s a top puck mover and also strong defensively.

+ Interesting that Petry and Davidson both posted below average defensive numbers. While both excel as puck carriers, they’re not top-end at minimizing the scoring chances of the opposition. 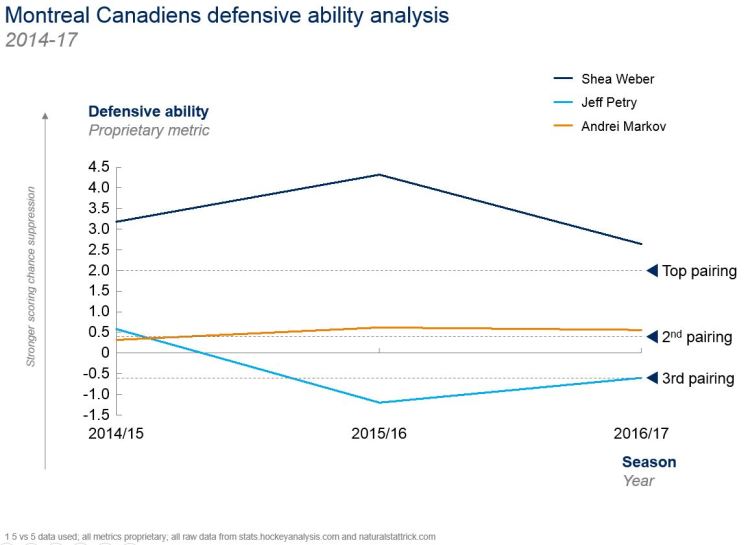 Looking at the Habs top 3 d-men over the past 3 seasons, Weber stands out as a top-pairing guy in terms of his ability to limit opposition scoring chances. Markov has been firm and consistent as a 3/4 to go along with his strong puck movement. Petry, despite excelling as the Habs top puck mover, struggles a bit more defensively.

There are many factors that go into the evaluation of a defenseman. Puck movement is so critical in today’s game and our puck movement metric highlights players who excel in that area. That said, supplementing those insights with context around their ability to limit opponent scoring chances paints a more complete picture on each player and enables a more sound evaluation.