Assessing value is still very rudimentary because many simply rely on points produced and use metrics such as $ per goal scored or $ per primary assist achieved. While there are no ‘perfect’ approaches, the one commonly used as described above has two major flaws: 1. Goals and assists limit you to evaluating forwards and 2. It does not account for quality of competition that each player faces (or teammate strength).

We attempt to improve on both points by looking at the value of defensemen in terms of puck movement. Now of course there are other factors that should contribute to the overall “value” of a player. To name a few: special teams (PK or PP) ability, intangibles and character, age, scoring chance suppression or defensive ability, points produced, and others.

That said, puck movement is a truly important skill in today’s NHL and, in interest of selecting ‘one metric to scale’, trumps both defensive ability and special teams – for several reasons.

First, puck movement inherently describes a measure of defense. If you’re controlling the puck and driving possession from the back-end, you’re not only helping your own team generate chances, but are also limiting the opportunities for your opponents. There are outliers to this rule (e.g., Shea Weber is not a great puck mover, but is among the best at taking away high danger chances by keeping pucks to the outside, minimizing second chances, etc.).

Second, the majority of the game is played 5v5 at even strength. So while power play or PK value is important and worth considering, it’s not as important as 5v5 performance.

We took our puck movement metric and adjusted based on QoC. Consider teammates Duncan Keith and Michal Kempny.

At first glance, Kempny’s higher puck movement score seems to best Keith’s. But layering in the context of QoC tells a slightly different tale. Keith’s -0.18 is still top tier among defensemen facing elite QoC. When adjusting for strength of competition, Keith’s 61.7 ranks ahead of Kempny. It’s not to say Kempny wasn’t impressive in 2016/17. As a puck mover, he was – just against very weak competition. 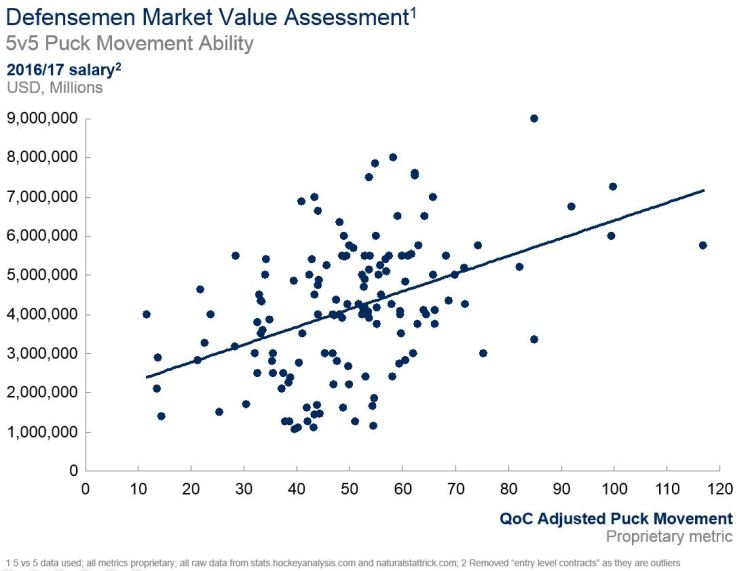 Here we map 2016/17 salary for every NHL defensemen against their QoC adjusted puck movement score. While there is solid correlation, it’s interesting to note many players (dots) that fall above or below the trend line (we removed entry level contracts from the above chart so as not to skew the results). While some of that discrepancy is driven by other factors not accounted for in QoC adjusted puck movement (e.g., special teams impact, physicality that some teams covet, defensive ability, etc.), some of it is also driven by contracts that don’t align with the player’s on-ice performance.

Without an obvious metric (like points for forwards), it’s harder to gauge true value for defensemen. We took a quick look at a couple players at great value, and others at worse value, in terms of dollars spent on their ability to be efficient puck movers and possession drivers.

The below chart references “top pairing” defensemen (i.e., the ~60 d-men who faced the toughest opposing QoC).

+ Brett Pesce was tremendous value for the Hurricanes in 2016/17. He excelled as a puck mover (PMF +2.96) while facing tough QoC, and is still on his entry level deal. Although we removed entry level contracts from the regression (as they skew the results), this example highlights the advantage strong performance on entry level deals presents in the salary cap era (J. Slavin was a similar example – just signed big extension).

+ Gudas and Trouba were also very efficient puck movers (both top tier among 1st pairing d-men) at reasonable cap hits (~$3.3M each). Trouba is due for an extension at the end of next season and should cash in.

+ Girardi really struggled as a puck mover in 2016/17 (bottom tier among top pairing d-men), and at a cap-hit of $5.5M was among the worst value players. Tampa signing Girardi to a 2-year deal at $3M per season will slightly improve the performance value (especially if he takes a 2nd/3rd pairing role in Tampa), although Girardi’s inability to drive possession against top opponents was apparent last season.

+ Phaneuf was OK in terms of puck movement numbers (PMF of -1.70 is lower end of 2nd tier / top of 3rd tier among top pairing defensemen), but at $7M per season that is not great value.

Understanding player value is paramount in the salary cap era. Because points produced are not as indicative of value for defensemen as they are for forwards, assessing d-men value will likely always be less straightforward. Using our QoC adjusted puck movement approach, we can make measure value based on projected performance, QoC, and role, and ultimately arrive at what we believe is a more refined view on a defenseman’s market value.