A couple things to note:

+ We rank “pairing” based on the quality of competition (which accounts for ice time) that each defenseman faces. Given normal error in the model, some “top pairing” guys will trickle into 2nd pairing and vice-versa

+ There are other factors that go into the value of a player (e.g., special teams ability, defensive scoring chance suppression, etc.), but we use QoC adjusted puck movement ability (because of the important of puck movement from the back-end in today’s NHL – we go into detail here)

+ Our puck movement metric considers relative corsi improvement, weighted by teammate strength (both defense partner and forward lines – isolated), zone starts, usage, and even chemistry. We look at it in more detail here.

+ Our QoC (quality of competition) was built based on 4 variables: opponent corsi for %, gf/60, FirstA/60, and TOI/gp. We discuss that in detail here.

+ QoC adj. PMF is simply the puck moving ability metric adjusted for quality of competition that the player faced. We touched on that here.

+ Finally, $ per is just the cap hit per QoC adjusted PMF score 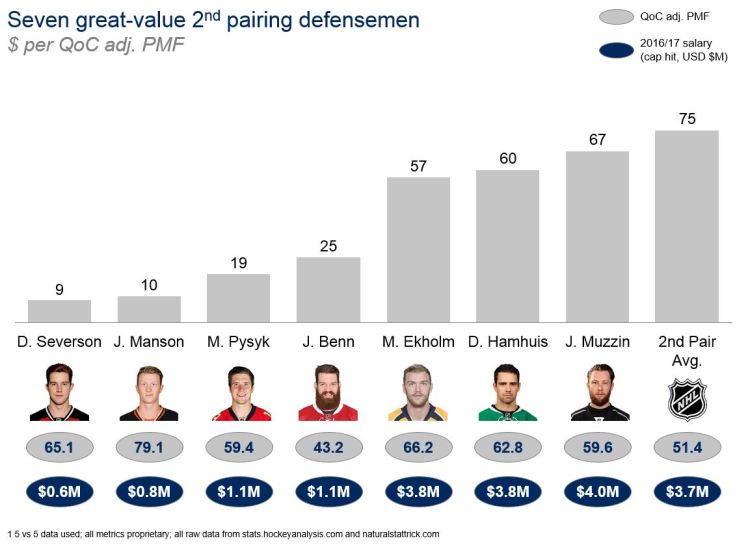 + Damon Severson (PMF +2.51) and Josh Manson (PMF +4.45) both excelled as puck movers against 2nd line competition. Severson was on a rookie contract which explains the extremely low $ per QoC adjusted PMF and is currently an RFA.  Projecting his next salary using this model has Severson signing at $4.8M per season (market value for 2nd pairing puck mover of his performance). Manson, too, will expect a raise if he can continue to build off his big 2016/17 (he’s a free agent after 17/18). If he maintains his performance level, expect him to sign in the $4M – $5M range, too.

+ Jordie Benn (PMF -0.47), who Montreal acquired this past season, is also strong value. He faced lower-end 2nd line competition (between Montreal and Dallas) and performed just OK. You can see his QoC adjusted puck movement ability is well below Ekholm for example. No one is making the case that Benn is a more efficient puck mover than Ekholm. But at $1.1M, this is excellent value – and a coup for Marc Bergevin and the Canadiens.

No team in any sport will be perfectly optimized across the board in terms of contract value. But finding 2nd and 3rd pairing gems – at great contracts – will often make a big difference.