The Tampa Bay Lightning and Montreal Canadiens completed a blockbuster trade this off-season. In exchange for their now #1 C Jonathan Drouin, the habs dealt prized defense prospect Mikhail Sergachev (picks were also exchanged in the deal). As a result, this trade will inevitably be scrutinized all year long. So we start today.

As is often the case, it’s point production that draws the attention of people. To that end, Sergachev has fared remarkably. His 12 points (4g, 8a) in 18 games are second highest among Lightning defensemen, trailing only Hedman (13 points) for the lead. Sergachev has come as advertised on the powerplay, quarterbacking the 2nd unit and amassing 5 points with the man advantage.

While his point total is impressive, he also has the luxury of playing with Kucherov and Stamkos – the NHL’s top 2 leading scorers to date – as well as a bevy of other talented offensive weapons. So how has he fared 5v5? To understand SERGACHEV’s impact, we look at his ability as a puck mover (which accounts for quality of linemates and competition). 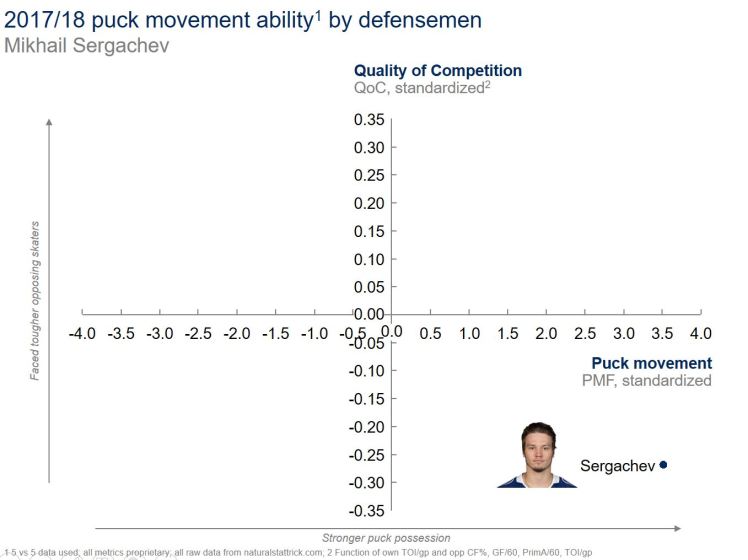 Sergachev’s PMF of +3.52 is excellent and is a testimony to the high end skill that he possesses. He is a strong skater and great puck handler, routinely driving the play from the back end. That said, the context of his performance is important:

+ Sergachev averages ~11 minutes of 5v5 ice time per night against the weakest QoC among all Lightning defensemen. Clearly, the coaching staff shelters him from tough opponents

+ He benefits from playing many of his minutes with Anton Stralman – an experienced and savvy puck mover, too (whereas Stralman spends the other half of his minutes against much tougher QoC)

Despite playing in a sheltered role against weaker opponents, Sergachev’s performance to date is hard to ignore. At just 19 years of age, he’s been extremely impressive. While his ability as a puck mover and offensive weapon is clear, whether or not he can become a reliable top pairing d-man remains to be seen.