Our primary focus this summer was on puck-moving defensemen – and for good reason. Puck movement in today’s game is paramount and defensemen are often tasked with “launching” the play from their own end. They are the catalyst for puck movement and, for teams who struggle at it, the bottleneck.

Our puck movement algorithm for defensemen is best suited for a larger sample size (e.g., a full season). Still, we decided to check-in on five intriguing names we identified this off-season. Here’s who we looked at, and why:

A couple caveats: 1) The PMF metric, over a full year, is more indicative. 2) We would normally layer in quality of competition; however, with a limited sample size we ignored it to date. Most of the players above have been at least playing top 4 minutes for their respective teams, so “ballpark comparison” would still hold.

Hamilton has been excellent so far in 2017/18. His PMF of +5.5 is in elite territory, proving his ability to drive possession and help his teammates generate scoring chances. To better visualize his impact on his teammates, look at how Gaudreau, Monahan, and Bennett have fared with and without him on the ice. 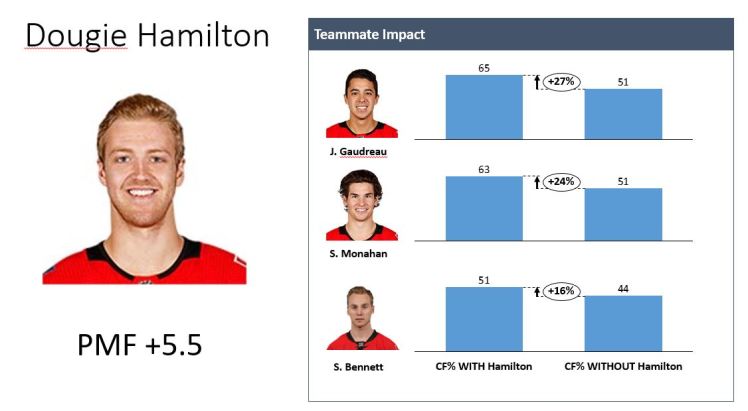 Their Corsi For % increases by 16-27% with Hamilton on the ice. That is impact.

Karl Alzner looking like a bad signing for Montreal

There appears to have been some merit to the “buyer’s beware” warning we touched on when analyzing Karl Alzner. Alzner, rotating between Petry and Benn, has struggled. He’s uncomfortable with the puck on his stick and consistently fails to drive the play from the back end. His PMF of -5.2 is just in line with last year’s season total – and is a terrible score.

+ Damon Severson (PMF +4.4) has picked up exactly where he left off. He’s been extremely solid on the Devils blue line, playing top 4 minutes. With Severson on the ice, Nico Hischier and Taylor Hall’s possession numbers increase by 25% and 16%, respectively. Real impact from the back-end.

+ Kris Letang (PMF -1.3) is not terrible (especially since Letang is used as a workhorse in all situations against top opponents) – but it’s far below what we’ve come to expect from Letang. It is not surprising to see Letang’s struggles coincide with Pittsburgh’s as a whole. KL is a premier puck moving d-man who will find his game – and when he does, other teams in the East better be ready.

+ Travis Hamonic (PMF -3.1) has performed in line with last year, but still far below expectations. For example, we saw (above) how Hamilton positively impacted his forward teammates. Comparatively, Gaudreau, Monahan, and Bennett’s possession numbers drop by 10-20% when on the ice with Hamonic. Ouch. It’s still early – and Hamonic’s adjusting to a new system with a new team – but Calgary has reason for early concerns.

It’s just 12 games into the 2017/18 season, but revealing nevertheless. Hamilton and Severson have been great. While a proven d-man like Letang will certainly bounce back, the futures of Travis Hamonic and Karl Alzner are less clear.  Hamonic, although performing below expectations, has still been OK and logs solid top-4 minutes. Karl Alzner, on the other hand, looks like a player suited for pre-lockout hockey and his contract like one that the Habs will regret for the next 5 years. Still, it’s just 12 games. Time will tell.